The Biggest Challenges of Scaling your B2B SaaS firm in Europe

The latest view from Europe!

During 2019, Intrinsic surveyed over 400 CXO, VP and Director-level Executives, most based in Europe for their views on the market, scaling in Europe, thoughts and have subsequently released the results of this new survey.

Intrinsic was fortunate enough to feature on this recent blog by Open View Venture Partners on the subject of scaling a SaaS firm in Europe.

What are the biggest challenges faced by B2B SaaS firms when scaling in Europe?

It is clear to see that finding new logos in Europe has given many scaling SaaS firms one of the biggest headaches during the last 12 months.

Further research from Intrinsic has shown that quality business events and the personal referral are by far the most successful channels in engaging with new prospects.

Cold emailing came bottom of the list and appears to be becoming less and less effective each year as alternatives such as LinkedIn inmails appear to have stronger results.

From a country perspective, Germany was ranked as the hardest EU country to find great Enterprise SaaS Senior Sales Executives!

Why do so many SaaS firms find it so tough to attract, hire and make successful their German operations?

The top reason seems to be a lack of understanding of the German culture, buying habits and appreciation of how the German economy operates. Much feedback we receive from our German network claim that US firms approach Germany by just making a few small tweaks to their US/UK business plans and the revenue will flow in! How wrong can they be!

Further, it appears the sales cycles and time to become successful can take much longer than the US, UK and other countries so extra patience is required.

Read the latest and detailed insights re: German Hiring here…

3 – The Best EU City Location for an Inside Sales Team?

Where is the best EU city for a SaaS firm to set-up and build its Inside Sales team?  There are many choices in Europe and from the research, there is no obvious answer.  London and Dublin have been popular in the past, but the cost of labour is expensive and the hiring market is highly competitive. 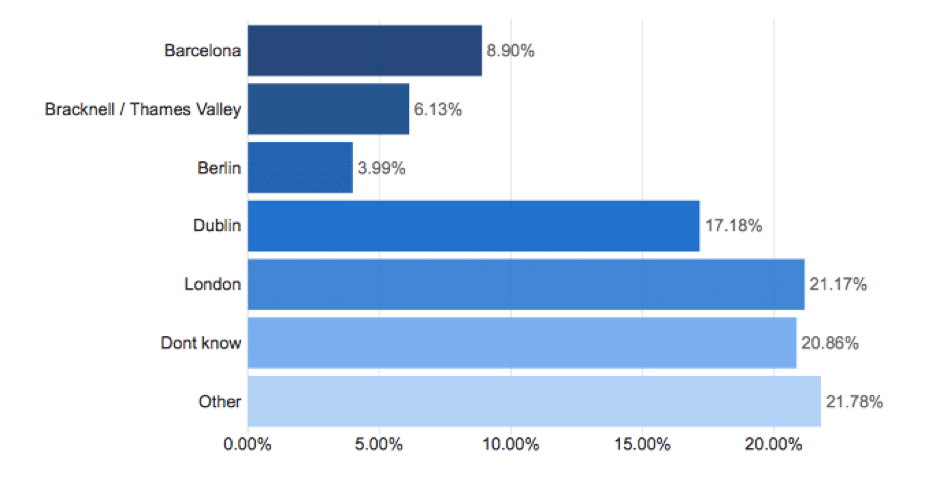 Does The Netherlands provide the answer?

These Dutch cities received many votes under the ‘other’ section. The Netherlands has certainly, become a location of major consideration for many companies in recent times, especially with all the uncertainty around Brexit.

English is widely spoken, culturally, The Netherlands is well aligned to the UK and the USA.

Great transport networks for Europe, entrepreneurial individuals and a favourable tax system makes the Netherlands a magnet for US and European B2B SaaS companies.

Our conclusion is that Amsterdam, London, Dublin and Barcelona are the main Inside Sales centres of the B2B SaaS industry here in Europe.

The basic salaries below DO NOT include car allowance / physical car or other benefits such as pensions and health insurances. 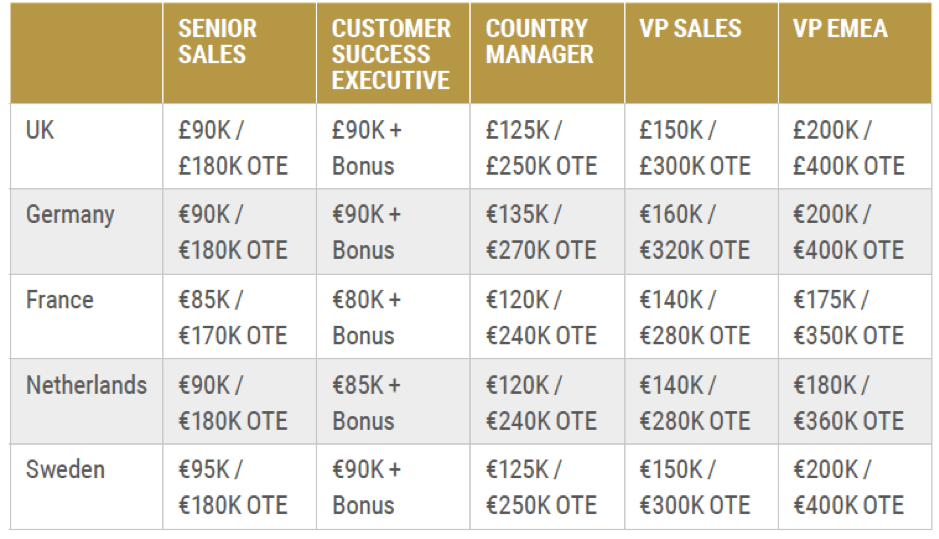 One thing is for certain – salaries for the above roles are only going in one direction and that is up!

58% of the respondents have experienced a fixed salary increase of at least 10% over the last 12 months, with over a third having their best total earning year in 2018!

In Germany, B2B SaaS Senior Sales Executives are earning around $110k – $140k as a base plus the same in commission.

As one can read from the above, scaling a SaaS firm across Europe is no easy task and there are many different considerations to make due to the diversity of the European region.

Where do you locate your European HQ and your Inside sale team?  What is the best approach to find new logos?  Cold-calling? Events?

Further, when it comes to hiring Senior Commercial talent, the hiring market is tough! Countries like Germany and Sweden often have full employment for the best Senior Sales Executives, meaning many candidates can pick and choose who they work for.

The hiring processes can be much slower in these regions, taking 3-6 months in some cases due to longer notice periods, hence SaaS firms may have to be more patient than faster-paced markets such as the USA.

In terms of the solutions, it is advisable to speak with the Experts.  Those who have the relevant contacts and experiences.  For instance, Leaders who have personally scaled SaaS firms in Europe.  They could be Chief Revenue Officers or even SaaS related Venture Capital and Private Equity investors who know the European market well and how best to succeed!